Translation of the Book of Abraham

Outside of polygamy, the Book of Abraham is probably my biggest barrier to faith in Joseph Smith's work. The LDS church has recently released an essay discussing issues with the translation of the Book of Abraham that can be found here. I'll summarize what the highlights were for me: 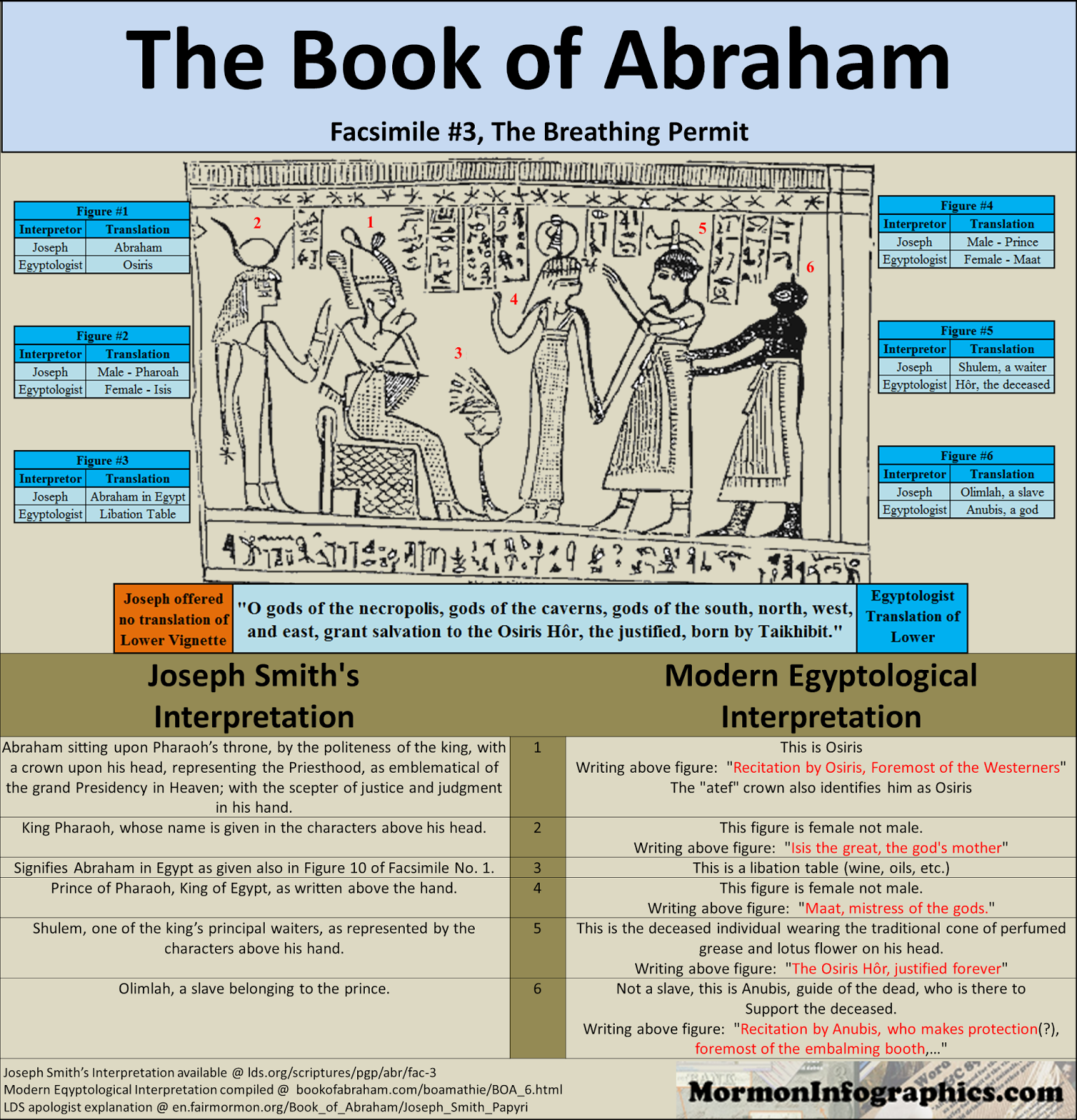 But anyway, the real problem for me with respect to the Book of Abraham's authenticity is Facsimile 3, and I'll explain why. The issue is that Joseph Smith makes claims about what specific characters mean in the picture. For example, the explanation for Figure 2 states, "King Pharaoh, whose name is given in the characters above his head." The explanation for Figure 4 says, "Prince of Pharaoh, King of Egypt, as written above the hand." Figure 5 says, "Shulem, one of the king’s principal waiters, as represented by the characters above his hand." Now it turns out that Figure 2 is really Isis, Figure 4 is really Maat, and Figure 5 is really Hor, the dead guy for whom the scrolls were made. The characters above them actually do say who each one of them is, but it does not match what Joseph Smith said. The problem is that Joseph Smith, working in his prophetic capacity, makes falsifiable claims that are indeed false. If he can be wrong about the translation of characters in Facsimile 3, this implies to me that he could be wrong about other things.

As historical context, when Joseph was working on the Book of Abraham, the fact that these characters could be deciphered was largely unknown in the American frontier. The Rosetta Stone had been deciphered about 10 years previous to the publication of the Book of Abraham, but that probably would not have been known to Joseph Smith. Had Joseph been making the book up, he would have probably thought that he could make whatever claims he wanted about the meaning of Egyptian characters and nobody could prove them false.

At some point in my questioning of my Mormon faith I decided to honestly ask myself the question, "what would it look like if Joseph Smith had made up the Book of Abraham?" I had to admit to myself that it would probably look a lot like it does, with Joseph overreaching and making some claims that could be proven false. It was not a happy thing to realize.

Another thing that I thought about was that if the Book of Abraham was the work of God, why would God want to have so much confusion surrounding its provenance and the validity of its translation? It would seem like he was purposely making it look like fraud. In fact, I think that if you asked random non-Mormons what they thought of all of this they would overwhelmingly say that the mistranslation of the characters in facsimile by Joseph would make it seem like he made it up.

For my LDS friends, to imagine how a non-Mormon would view this, imagine that David Koresh came into possession of some Sumerian clay tablets and claimed that they were were engraved by King David's own hand and contain a prophecy that David Koresh would be a great prophet. When scientists examine and translate the tablets, they turn out to be a fragment of the Epic of Gilgamesh that dates to more than 1000 years before the life of King David. Would we not sit and wonder why Koresh's followers can't see that there is something really wrong here?

It seems like a God that would want truth to appear false would be what is referred to as a trickster God, and I can't bring myself to believe in a trickster God, a God who plants contrary evidence and expects you to believe unbelievable things just to see if you will follow along.

You see, I have a hobby interest in cults. I find it interesting how they work psychologically. A lot of cults have beliefs that are crazy to normal people. When followers start to detect how crazy things are and ask too many questions, the go-to answer from cult leadership is frequently some variation of "God is testing you, you need to have faith despite the fact that this is very difficult to believe and doesn't make sense to you." The problem I have with this type of thinking is that it works extremely well to keep people in belief systems that are obviously false, like the Heaven's Gate cult or David Koresh's cult, etc. I want my tools that I use to discover truth to be tools that would be effective no matter where I started, not tools that would only be effective at keeping me from changing my beliefs no matter what. I mean, what if I were born into the Heaven's Gate cult? Hopefully I would question that religion like crazy and notice that it doesn't make sense and leave, right?

For me, there is something majorly not right about the notes in Facsimile 3 not matching their actual translation. There have been various explanations given by apologists for why this could possibly not be a problem but all of them pretty much boil down to ignoring what seems extremely probable (that Joseph Smith simply made them up) and focusing on some very improbable but possible explanation. I was raised in a church that claimed that God wanted everybody to be a part of this church. Why place these types of barriers to faith before us? Would that not stop many honest people from joining God's true church? The common response is that it is a test of faith. If that type of test of faith is good, why not make things completely absurd? If that is how God operates, maybe Heaven's Gate was his true church. I mean it is the most difficult thing I can imagine to have faith in, so if I did manage to have faith in it wouldn't that prove that I was awesome at having faith?

What it comes down to for me is that the only God I could believe in would be one who gives tests with a purpose and I cannot detect a purpose in God requiring me to believe in the translation of the Book of Abraham. You can believe unbelievable things and still be a horrible person and you can have no faith in anything supernatural and be kind and compassionate. If I hypothetically assume that God wants me to believe in this, I guess it all seems like a huge distraction from what I think would be the primary goal of a just and loving God: getting people to behave better and show more kindness, compassion, and understanding to their fellow man.
Posted by Heath Workman at 8:13 PM